Dotun is who most people would call an ‘Industry Guy’.

In Lagos, Nigeria, you would find that he is one of the most famous people in the entertainment industry and wears many hats, foremost of which is his corporate job at Trace TV.

Adedotun Adekanmbi is the Marketing & PR Lead of Trace Anglophone West Africa, a Twitter Spaces host and a farmer; talk about successfully holding down a 9-5 and side hustles. At his day job, he leads his team to execute brilliant marketing strategies across the board and contributes to the growth of the business. Other times, he is hosting one of the most engaging and sought-after spaces on Twitter and running 0204 farms.

In the first episode of our Payday Chronicles series - where we explore the realities of workers in Africa - Dotun walks us through his typical life as an employee, how he manages his everyday bills, navigates emergency expenses and builds up financial wellness. He is a heavy preacher of the gospel of savings. He would happily shout it from the rooftops if he could. For him, as the economy changes over time, one has to change with it and this means more savings; it gets real when he tells us: ‘Anything can happen in a split second, you could go from being very comfortable to having nothing in a few minutes.’

Dotun: I earn in the sizable 6 figures, a couple thousands short of the 7 figures which is the main goal tbh.

Cadana: Interesting, so do you budget your monthly expenses? If yes, what are the things you budget for?

So every time I get my salary, the first thing I do is just pay my tithe. I am a Christian so it’s only right to give back, especially when you’re earning a considerable amount of money. I have never been the type to budget my monthly expenses in a certain way but I budget right, so I’ll tell you how it works for me. I like to take care of tithe first, then ideally there’s a cable service, there’s my internet subscription and there is my food subscription which I do with Eden. So, once I sort those ones out of the way, the greater part of my money just goes into my savings. But, coupled with the fact that I do a little of this and that, in Naija here you know you cannot have just one job, so I always tend to rely on my side hustle to keep my running expenses throughout the month so the bulk of my salary goes into my savings.

Cadana: Alright. I was going to ask you the first thing you do as soon as that credit alert hits, however you’ve mentioned tithing. After that, what do you do next? Do you go balling? Do you splurge?

Dotun: Ideally, I don’t go balling. I wouldn’t classify it as balling. But, certainly, that weekend, me and my guys are out just at a pub or a nice recreational place to unwind and just get settled into the new month. It’s always been a tradition to just go out, especially because I move with a certain number of salary earners so we always know that everybody is boxed up at the end of the month, at this particular time. All we do is go out to the pub and have a drink a two, and if there’s another activation or show that weekend, we’d probably buy tickets and feel good about ourselves. But, I’ve never really made it a core focus to ball immediately after my salary enters. I understand what savings can do for you so, I’m an avid preacher of saving your money.

Cadana: Interesting. Have you always used this pattern for your finances? Or did something happen at a point that made you go heavy on the savings?

Dotun: Oh yes! A lot has actually happened and it’s basically because of the exchange rates because most of the things that I buy which are probably my wants or my needs, they’re always in US Dollars. I mean you’re forced to save extra hard now in this economy when you know that the currency is really volatile. Today, you could be earning much but saving a lot or saving in Naira doesn’t cut it again.

So at every point in time, every income I get, I try to save 50% of it. I could always put the remaining 50% into my wants, my needs, and some miscellaneous that I have to do but, I’ve always made it a point of focus now to save maybe 50% of my salary if not more, I think I save way more than 50% at some instances. And, that’s because the economy is really volatile right now, you really don’t know, you might think that you have a lot of money but, at the same time when things start popping off, you realise that even the money wey you don dey save is not really enough to save you from a lot of things.

And the economy is crazy because anything can happen in a split second, you could literally go from being very comfortable to having nothing in a few minutes. At every point in time, a greater bulk of it all is ‘save, save, save. I’m very happy that I’m earning enough to eat and save because most people would tell you that Na person wey don chop dey save’. ‘Me I dey chop, so I gats save’.

Cadana: Word! So, you hinted at the fact that you have side hustles. I know you have the farm, the Twitter Spaces you host and a couple of other things you do. Do they help you to be financially stable now as an employee? Or do you think you could live off your salary alone?

Dotun: I don’t think that. I think that at this point, the economy - and we keep talking about the economy because I really do not take it lightly, most times I follow a lot of things happening and for everybody that does the same, you’d come to a sudden realisation that you need to project what you’re earning right now in regards to the future. The way I mirror it is this: when my parents were still working - my dad is retired now and my mum retired as well - I guess the economy wasn’t as bad then and they saved a lot and that’s why they were able to afford a very good education for me and my siblings. We went to very good schools - all private universities - and what I realised was that they started saving at a younger age. So, I’ve always made it my thing to just save, save and keep saving. I do it for the future and that’s why I keep saving because with the situation of things right now, you also always need to have a side hustle in Nigeria because honestly, working for a private company is tedious as it comes right.

So, it’s only right that you have a side hustle that keeps your running costs every month going particularly with the fact that some labour employers right now aren't taking the inflation rate into cognizance. The average thing you used to buy at x price last year or early this year is double the price and lesser in quality. You need to have a side hustle to maintain that balance, not exactly maintain, because you can’t even maintain it. After all, it's a downward slope. The idea is that you can keep things floating, you might not be able to pass that stage but you can keep your basic expenses floating; a side hustle is really important at this point in time. I think that when people learn other skills, they should put them to use and do something freelance by the side just to make up for their income.

Cadana: That makes a lot of sense. There’s a lot of conversation around the monthly pay cycle. Most people suggest that employees don’t have to wait till the end of the month for salaries because there are constant bills and emergencies. What do you think about that? Do you think that if you got your salary say by the first week or second week; it would improve your finances?

Dotun: To me, I just think that at the end of the month is really better. What that does for me is keep me aligned. Let me tell you, in as much as I save, I am very prone to spending recklessly so I don’t think that would work for me. I think that if I receive my money monthly, it will and has always worked for me. I’m open to change right but right now I prefer to plan and save monthly.

Cadana: So, if Trace said to you today, ‘Hey Dotun, you don’t have to wait till payday to get your money anymore. If you need money by week 1 or mid-month when it hits, you can access your salary’. How would you feel about it?

Dotun: Oh I won’t feel good. Honestly, I just want all my money at the end of the month when I know that I have something to look forward to.

Cadana: Yeah, but that’s because you have a solid savings culture, so when emergencies hit, you can go to your savings, right?

As we explore the realities of employees in Africa by talking to them and having these necessary conversations, one thing is clear, at least from this story, and that is: their realities are different. After this episode of the Payday chronicles series, we have even more questions. For instance, we know you’re asking: So what if I’m not good at saving? What if my monthly salary doesn’t cover my daily bills and savings anymore? Perhaps you’re also wondering: What if I want to be able to simply handle my bills without dipping into my savings in the first place?

Then, there’s the real question: What if you have an emergency but little or no savings at the time to cover the bills, and payday is so far off? The thought of it alone is stressful if you ask us, let’s keep it a buck.

Life is unpredictable. Children get sick, cars break down and random bills come up at the most inconvenient times. Cue Cadana Instant Pay, the best way to access your earned salary on-demand and handle those emergencies.

Refer your employer here today to get started. Learn more about how Instant Pay works here.

Work leaves are usually exciting, especially if you have looked forward to it for months. It is a great time to de-stress and rejuvenate to return even more productive. However, as with everything else in the workplace, you need to plan and ensure there is a smooth workflow while you 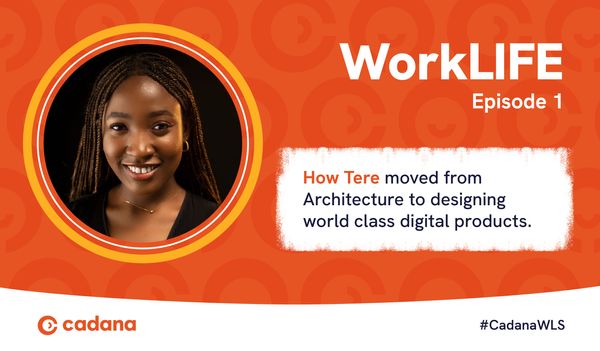 Work Life is a new Cadana series that talks to people that have successfully created a career path for themselves across various industries. New episodes will drop every month and we’ll explore working through the lens of people who are figuring it out day by day. Tere Sagay is 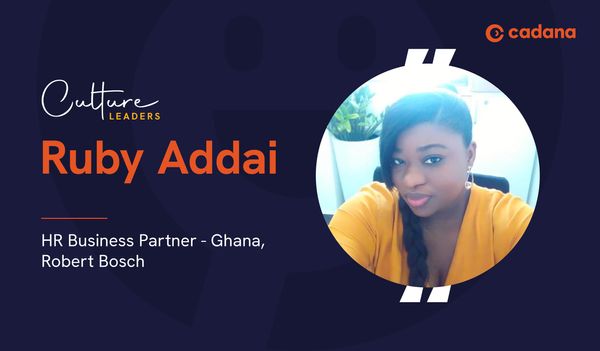 For the August edition of our Culture Leaders series, we chat with an HR professional with over 12 years of industry experience, Ruby Addai. Ruby is the HR Business Partner - Ghana for Robert Bosch Ghana Limited, leading People Management. She is passionate about improving the educational system in Africa